On arrival in Chennai you will be met by our representative and escorted to the hotel.

After breakfast set off on a sightseeing tour of Chennai.

Previously known as Madras, the city can trace its history back for 368 years when it was a tiny fishing village. Drive along the elegant promenade by the famous Marina Beach. At the southern end of the marina visit the Basilica of San Thome Cathedral. It derives its name from St Thomas and is said to mark the final resting place of the saint. Also visit the Bronze Gallery at the Government Museum & National Art Gallery to see the superb collection of South Indian bronzes from the 7th-century Pallava era through to modern times.

In the morning set off to Mahabalipuram, an ancient town and home to exquisite World Heritage–listed rock-cut temples, caves and carvings.

On arrival visit some of the city’s ancient archaeological wonders. Arjuna’s Penance or the Descent of the Ganga is a magnificent relief over 100 feet long, and is a beautiful composition of hundreds of celestial beings. Overlooking the sea, surrounded by gardens and ruined courts, is the elegant Shore Temple. It features two granite spires which have stood for 12 centuries.

The other wonders of Mahabalipuram are the mandapams – caves that have been scooped from a hillside of solid rock and ornamented with pillars and sculpted panels. Huddled together at the southern end of Mahabalipuram are the Five Rathas. Each of these fine 7th-century temples has been carved from single large rocks and is dedicated to a Hindu god. Also in this area you can see a magnificent sculpture of an elephant and an exquisite Nandi, the sacred bull.

In the afternoon visit Kanchipuram, one of the seven sacred cities in India. The Golden City of Kanchipuram has about 125 shrines, all of them centuries old. Kanchipuram‘s other claim to fame is its silk, renowned for more than four centuries. A unique system of weavers makes and sells Kanchi saris – the richest and most sought after saris in India.

After breakfast, drive to Pondicherry and spend some time exploring the city.

Pondicherry was the largest French colony in India. Its strong French influence can still be seen especially in the old quarters, with rues and boulevards lined with Mediterranean-style houses and bakeries. Visit the internationally famous Sri Aurobindo Ashram founded by Sri Aurobindo, a revolutionist turned poet. The Ashram is a centre for the practice of yoga, meditation, and inner development.

Just north of the town Auroville draws large numbers of spiritually minded visitors. Auroville is a township where people from different nationalities, faiths and beliefs live in peace and harmony exploring pursuits in accordance with the Auroville Charter. The meditation hall, known as Marti Mandi, features the world’s biggest man-made crystal ball.

The rest of the day is free to relax or explore the streets and local markets.

After breakfast drive to Tanjore. After checking in to the hotel set off for a sightseeing tour of the city.

Tanjore is famous for the ancient Brihadeeswara Temple with its exquisitely sculpted gopurams that rise for over 90 feet. They lead to a vast courtyard where two sentries carved out of single stones stand guard over the main temple. Facing the sanctum is a nandi (bull), Shiva’s favourite vehicle. The corridors around the sanctum feature sculptures as well as recently discovered Chola frescoes. Members of the former royal family of Thanjavur still occupy some apartments in the inner recesses of the Thanjavur Palace, but its main use is as an art gallery.

After breakfast set off on an excursion to Trichy.

The historical town of Trichy was once the capital of the Chola rulers in the 3rd century BC. Visit the Rock Fort, perched 83 metres high on a massive outcrop dominating the landscape. The far-reaching view from the top is well worth the climb up 400 stone-cut steps. Also visit the Island of Srirangam across the River Kaveri. The island’s Tamil-style temple is rich in legend and history and occupies an area of 156 acres complete with residential and shopping streets.

The rest of the day is free at leisure.

After breakfast drive to Madurai and on arrival check in to the hotel.

After breakfast set off for a sightseeing tour of Madurai.

Known as the city of festivals, Madurai is the ancient home of culture. The town has developed encircling the dazzling maze-like Meenakshi Temple built in the Dravidian style. It is believed that if you place a literary work in the tank of this temple, it will sink – if worthless, and float – if worthy. Outside the temple are the Musical Pillars which produce different swaras or notes when tapped. Visit the Palace of Tirumala Nayak, the most famous king of the Nayak dynasty. A large courtyard surrounded by tall, thick columns topped with fancy stucco work leads to the grand throne chamber.

In the evening return to the temple to witness a unique Aarti ceremony.

After breakfast drive to Periyar (Thekkady), and on arrival check in to the hotel.

After breakfast spend some time sightseeing in Periyar.

The very sound of the word Thekkady conjures up images of elephants, unending chains of hills and spice scented plantations. This is the location of Periyar National Park, one of the finest wildlife reserves in India and home to thick forests and a host of animals including elephants, sambar, tigers and langurs.

In the morning take a boat ride on Lake Periyar to view the wildlife and water birds. Herds of elephants and bison often come to the lake and you may also see spotted deer and sambar. Later visit the spice plantation. Wander round to see the many different spices that are grown throughout the plantation.

In the morning after an early breakfast, drive to Kumarakom. On arrival check in to the hotel. The rest of the day is at leisure to enjoy the unique surroundings.

The village of Kumarakom is a cluster of little islands on the Vembanad Lake, the largest wetland system in India fed by a vast network of canals. The bird sanctuary is home to many species of waterbirds including egrets, darters, herons, teals, waterfowl, cuckoo and wild duck. Many migratory birds like the Siberian Stork also visit here in flocks.

The rest of the day is at free at leisure.

After breakfast drive to Cochin, and spend some time exploring the town.

Cochin, originally built by the Portuguese, has a natural harbour with lagoons, canals and fishing hamlets. Explore the beautiful Mattancherry Dutch Palace. This iconic building was built by the Portuguese in 1555 and renovated by the Dutch in 1663. Walk through the rooms and admire the vibrantly coloured murals telling the story of the epic Ramayana. See the Jewish Synagogue in Jew Town, and wander through the picture-postcard streets lined with 17th century Dutch and Keralan-style houses. Visit St Francis Church, the oldest European church in India, which contains several antiquities including a palm-leaf title deed given to the Portuguese in 1503 by the local Raja. Along the tip of Fort Cochin photograph the huge cantilevered Chinese fishing nets – living symbols of the centuries-old Chinese influence on this coast.

That evening watch a performance of the traditional art form of Kathakali dance. Male actors caked in brightly coloured make-up cavort on the stage in a spellbinding display of morality-theatre, while the women perform the more graceful dance form, the Mohiniattam.

Transfer to the international airport for the flight to your onward destination. 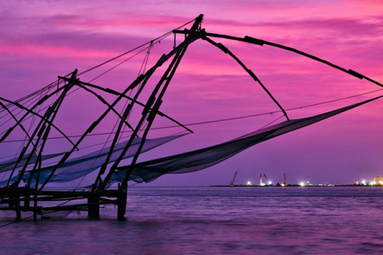 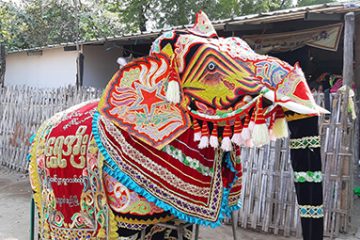 Highlights Watch a performance of the traditional 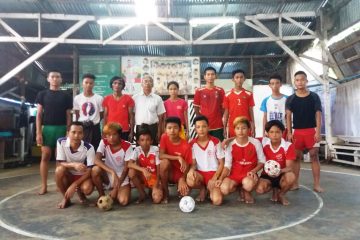 Highlights Get an intimate insight into everyday 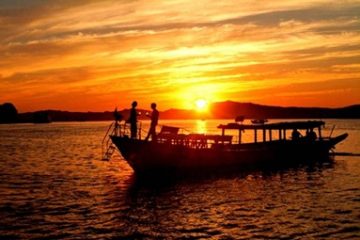 Highlights Cruise down the Irrawaddy River in
One tour per person 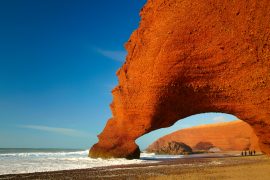 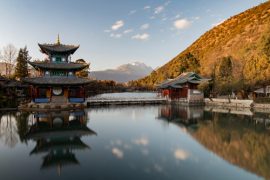